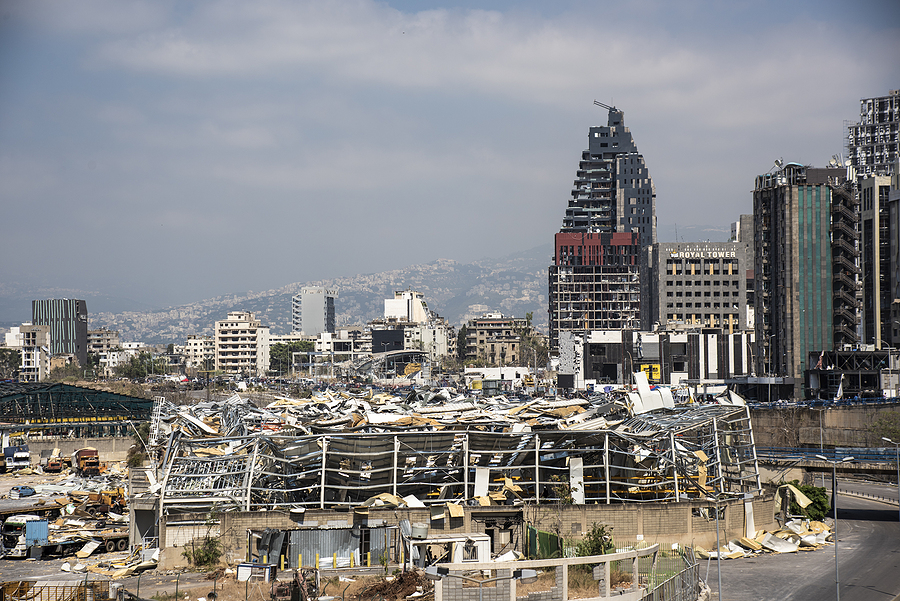 Dozens killed by the huge explosion at Lebanon’s Beirut

The destruction wrought by the enormous explosion that blasted through Beirut on August 4 is beyond any country’s worst dread. The explosion left the port a wasteland; cars hanging from the mangled beams of warehouses, bent containers spread across roadways and a large ship listing onto the quayside.

At least 200 people were killed and 5,000 injured in the incident, which officials blamed on improper storage of 2,750 tons of ammonium nitrate at the Beirut port since September 2013. Since it was abandoned in Beirut harbor nearly seven years ago, it is still unclear what ignited the blast aboard a cargo vessel loaded with a highly explosive commodity and foolishly left in a civilian port. However, there is no question that what occurred was not an accident.

It blasted shockwaves through the city, destroying buildings and shattering windows even on the outskirts of Lebanon’s capital.

The Ministry of Health and local and foreign humanitarian groups conducted an evaluation and concluded that at least 20 health structures in the vicinity of the explosion suffered moderate-to-serious damage, with just 25 health structures capable of providing full routine health services.

Unfortunately, this explosion has made around 60,000 families (approx. 300,000 individuals) homeless or suffered extensive damage to their homes.

A total of 300,000 dwellings were damaged or destroyed as a result of the blast.

Most of those 60,000 families moved to stay with friends and relatives in their damaged houses or in free accommodation offered by fellow citizens. Shelters have been established by the government and local organizations, but many displaced people preferred to move to shelters close to their damaged homes or to return to their neighborhood during the day for fear of looting and theft.

Almost every family living in undamaged buildings has taken in additional people, hosting up to 10 individuals in a significant show of solidarity that is very well known about the Lebanese people.

Beirut is a city accustomed to rising from the ashes, having been destroyed and rebuilt seven times in its 5,000-year history. This most recent disaster, however, is more chilling than any previous war, invasion, or earthquake that wreaked havoc on the ancient city, because it was caused by Lebanon’s ruling elites, not by a hostile outside force or natural disaster.

The explosion in Beirut port comes as the country faces an unprecedented financial crisis and a surging coronavirus outbreak.

Located in the heart of the capital, the port is a vital piece of infrastructure used to get scarce goods in the country. The explosion damaged grain silos in the port which are a strategic reserve of wheat for the crisis-hit nation.

The explosion has also had a devastating impact on Lebanon’s long-struggling economy, fragile political status quo, and international standing.

The port that exploded was the country’s main entry point for goods imported via sea. The effects of the explosion at the port of Beirut on the Lebanese economy and supply chains, worsened an already deteriorating socio-economic situation, and unfortunately this resulted in a further increase in the number of the poor and extreme poor population. More than 50% of the population here now lives below the poverty line.

In the last two years Lebanon’s currency, the lira, has lost more than 90% of its value against the dollar. Two years ago, the minimum wage was equivalent to $450, now it is worth little more than $35.

Petrol is in short supply. Power cuts in Beirut often run for more than 20 hours a day. Thousands of businesses have closed. Unemployment has skyrocketed. Baby formula has disappeared from the market. People beg relatives visiting from overseas to bring life-saving medicines no longer available in pharmacies here.

It is not clear the amount of cash the government secured to provide shelter for 300,000 who lost their homes and to ensure the flow of basic commodities in the aftermath of the explosion. It eventually added to its existing domestic and foreign debt to pay for recovery and reconstruction, causing the Lebanese government to become even more dependent on foreign aid, and weaken its negotiating position against the International Monetary Fund (IMF). As a result, the country’s existing divisions on foreign policy deepen, with rival political groups fighting over where Beirut should turn for help at their time of grave need.

The devastation and public anger caused by the explosion, coupled with the increased involvement of foreign powers in the country,  further weakened the Lebanese government and added fire to existing domestic political tensions.

The Lebanese people had faced an unprecedented tragedy. After experiencing a devastating economic collapse and trying to fend off a pandemic with limited resources, they were now faced with the enormous task of healing their wounded and rebuilding their capital city and main port. There is a sense of exasperation and fatigue after all what the country has been going through.

Ahmed Alameldeen, an Egyptian from Cairo, who currently works as a Humanitarian Aid worker with the United Nations. He was appointed by the United Nations Population Fund (UNFPA) for the planning, coordination and implementation of humanitarian interventions for those affected by the Beirut Blast, including rapid assessments, program development and implementation. He described the horrific events of that day:

“We started to work on supporting clinics in Beirut located in the vicinity of the explosion, to make sure they have the enough medical equipment, human resources and financial resources to provide the services without any interruption” he said.

Also, we managed to establish some field clinics able to provide the same services, to replace the destroyed health structures.

The weeks of protests by survivors and families of victims are a stark reminder of what is at stake. Their pain and anger have been exacerbated as, time and time again, authorities obstruct their right to truth and justice

One of the slogans of one of  the uprising against the political elite was “Kulun yaani kulun” — “All of them, meaning all of them” — referring to the widespread demand that the entire political elite be swept away to allow Lebanon to realize its potential.

Yet all of them have managed to weather the triple storm of the past year — explosion, economic collapse, and coronavirus pandemic — intact and healthy, physically and mentally. Meanwhile the rest of the country struggles on, day by day.

“The UN Human Rights Council must heed their call and urgently set up an investigative mechanism to identify whether conduct by the state caused or contributed to the unlawful deaths, and what steps need to be taken to ensure an effective remedy to victims.”